Want to buy nice halal dollies for your kiddies? (For those in the Emirates and in Qatar)

I know your first question might be like: “And what does this have to do with Ramadan?”

[For those of you who know me, you know that I could post an article about some turtle in Australia and somehow link it to Ramadan. My brain just works a bit differently.]

Well, the poster for these dollies said: “A lovely gift for Eid” so that’s why I’m mentioning it on my Ramadan blog.

So, here’s the flyer: 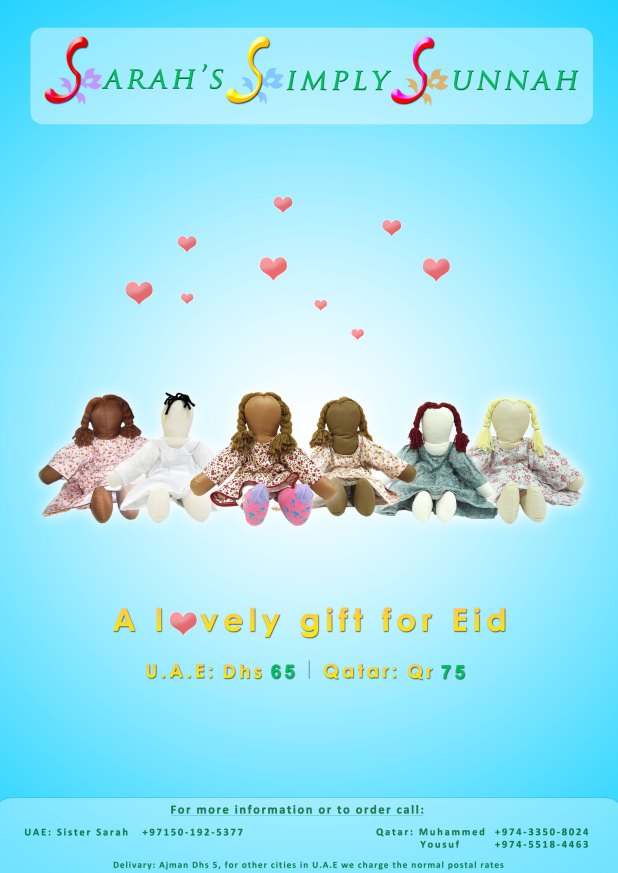 Firstly, why am I advertising this?

1) I love the idea of halal dollies. I’ve been dreaming of someone producing something like this. Alhmadulillah, someone finally did.

2) I know the people involved and they’re good folks, masha-Allah.

Now you might ask: “Why are these dollies halal? What’s wrong with Barbie?”

Firstly, there is a prohibition on drawing images of animate objects.This is something that many people are heedless off yet it is a BIG sin.

Ibn Umar reported Allah’s Messenger (salallahu alaihi wasallam) having said: “Those who paint pictures would be punished on the Day of Resurrection and it would be said to them: Breathe soul into what you. have created.” [Saheeh Muslim, Hadeeth No. 5268]
Abdullah reported Allah’s Messenger (salallahu alaihi wasallam) as saying: “Verily the most grievously tormented people on the Day of Resurrection would be the painters of pictures.” [Saheeh Muslim, Hadeeth No. 5270]

The worst punished on the Last Day will be the image makers. Subhan Allah. Despite this, many people still draw images of living things.

[This includes 2-D and 3-D images, by the way. It also includes things which have a life like humans, animals, creepy-crawlies, etc. And no, plants are not included.]

Also, things like passport photos are allowed because they come under the ruling of necessities.]

Also, the angels are not going to be hanging around your home if you have these images around:

Narrated Abu Talha: I heard Allah’s Messenger (salallahu alaihi wasallam)  saying; “Angels (of Mercy) do not enter a house wherein there is a dog or a picture of a living creature (a human being or an animal).” [Saheeh Al-Bukhari, Volume No. 4, Hadeeth No. 448]

[ I heard about a fool who kept a dog in his house because he thought that way he could keep the Angel of Death away!!!]

Now, the scholars did differ as well on whether dollies with faces come under this prohibition. This is because there’s a hadeeth where Aisha is playing with a horse dolly (although it doesn’t state anything about the dolly having features) and because the rule is SOMETIMES relaxed for kiddies in certain things.

So, you might ask: What’s wrong with buying the dollies with the faces?

1) If you buy those, you’re entering into an area of doubt and contention.

2) Why go for something doubtful when you can go for that which is free of doubt?

3) Until when will you keep pampering your children with the dollies with faces? I know some people who are now adults but still keep those awful stuffed toys in their homes. Their parents got them into the habit and they couldn’t leave it when they grew up.

Try to obey Allah in all aspects of the shariah and don’t just look for the easy way out.

Allah makes it easy for those who try to obey Him.

[And yeah, you can buy the halal dollies too. They’re quite cute.]